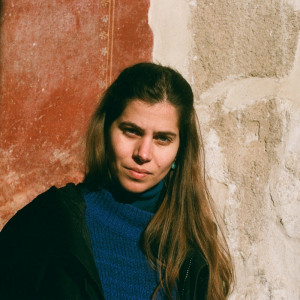 Marga Almirall (La Floresta, 1989) has a degree in Audiovisual Communication, a Postgraduate Degree in Audiovisual Editing, and has studied the Feminist Laboratory of Documentary Creation at La Bonne, as well as studies theory and film critics. She currently works at Drac Màgic cooperative where she is co-responsible for film education projects. She directed the video essay DEAR (DAILY) LIFE (Estimada (vida) diaria), and co-directed with Marta Nieto THE LAUGHTER OF THE JELLYFISH
"La carcajada de la medusa" and FROM A BODY TO THIS PART "De un cuerpo a esta parte". She has directed the short film ELENA UNIVERSO, which received a special mention from the jury at the Alcances documentary film festival and has been selected for numerous national and international festivals.